What is Project Gooseberry ?

Project Gooseberry is Blender’s fifth open movie project and it is different. In fact it is very different from all previous projects…

And this article explains what that project is all about and why i am so excited about it.
And you can decide to support it as well.

It is about making a feature film

Blender Foundation plans to create a full length feature animation film of about 90 minutes. The film is about Michel the sheep, who’s longing to get an interesting life. It will be a funny, absurdist and adventurous love story, directed by Mathieu Auvray.

It is about involving YOU!

Blender Foundation plans to bring 10000 people together to found about half of the production costs for the film. As of today BF was able to interest  2650 People and every day another 100 people step in. You can be the next to join!

New with Gooseberry:
In this film project the production is expected to take 18 months, with 60-80 people (from 12 studios spread over the world) participating full time, supported by a huge online community who will be involved and participate as well.
Previous Open Movies:
In previous film projects a small team of 10-20 persons has been brought together for several months to create a short film and then publish the finished result.

It is about using new collaboration technologies

Due to the fact that the production studios are spread over the entire world, the entire production will be organised within a data cloud (the Blender Cloud ). That is, the project will use Cloud technology to allow all teams to share their production data.

And using a Cloud is centered around the idea to open up access to the users, not shielding data from them as you might think when you hear the word “Cloud”.

And most important: You already can access the Blender Cloud and

BF organises the creation of an open Movie. That comes along with creating open Content. And that means, all content that is created in the Gooseberry Project, let it be characters, props, sounds, music, script (the story), Addons, project related Blender development, … All is free to use, mostly under the Creative Commons CC BY 4.0 license

It is about improving Blender

Like in all previous Open Movie projects Blender will be pushed beyond its limits. And making a feature film is a hell of a lot of pushing. You can expect to see many improvements from small to large. And to name a few popular features:

And there is more to say …

It is about learning

Opening up the production process to the user community bears the chance for everybody to learn. Of course mostly users will learn from the production studios, how they approach their tasks and how they create their characters, props, etc…
[PS-Youtube id=”Fj0Hfo1CB6E” w=”320″ h=”206″]

In order to support this idea of learning from the Pros even further, the studios will not only create the film, but also training- (learning-) material to expose their knowledge even further to the interested spectators of the show.

And there is Training

However the film has not started yet, so there is not too much of production data available, except for the Gooseberry Teaser. Because of this BF has decided to make all of the 11 BF training courses available within the Blender Cloud. These training materials cover topics like:

Plus the production data from all previous created Open Movies as well:

And all of the data is published under a creative Common license 4.0 and that means: You can use the content even in your commercial projects!

And now take a moment …

Making this all possible, letting 80 people work for 18 months, organizing the project,… All of this can not be done out of the Blue. Ton Roosendaal (Chairman Blender Foundation) has made a calculation and he came to the conclusion, it will be doable with a budget of 3-6 Million Euro (about 4-8 Million US$).

Half of this shall be founded by the users. So accessing the Blender Cloud comes with a paid subscription. This is a fair deal for all involved people. And you benefit most, because you will get the opportunity to become part of a magic film production, get the chance to improve your talents, even get the chance to actively participate in the film production. 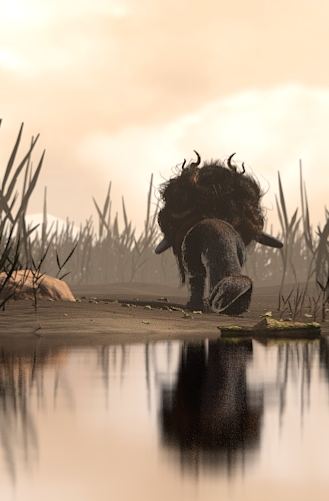 Ok… the moment is over. Now make it real, go to subscribe.

We Only Live Twice (link)