Hint: It is not essentially necessary, but maybe helpfull to also watch the previous part of this tutorial series.

We start with a rough sketch of our shoe. You could just search the internet for a side view of your preferred shoe model and use that. But i have already used Blender’s Grease-pencil to sketch my shoe directly on the screen. And i used my character model from Make Human as my foot reference. 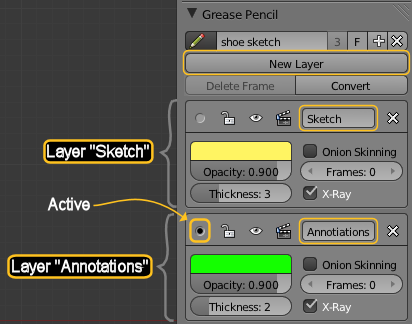 Before we actually start with modelling, let us first take a closer look at the sketch.

The layer is automatially selected as “active layer”, hence as soon as i start using the grease pencil, all i sketch will be painted in green.

Hint: a nice way to activate draw mode is by pressing the “d” key and keep it pressed all the time while you use your mouse to draw (press LMB), or erase (Press RMB)

Hint: Paint straight lines by pressing down the CTRL key while you draw.

Hint: When you use the above described method, then please ensure that the checkmark for “Use Sketching Session” is disabled. Otherwise you can not erase with CTRL+d+RMB

When you create 3D models, then you will use “Polygons” as your atomic elements. These Polygons get attached together to form your final shape. Amongst all possible polygons, you will mostly use Triangles (Tris) and Rectangles (Quads) for your work. Many 3D-tools do not even support other polygon types at all. And many (most? all?) game engines will convert all polygons to triangles before they actually use the models.

And there is another nasty caveat here: A Quad can be converted to a Triangle in 2 ways, see image above. And this can have an influence on the actual display of your model due to lighting calculations along the triangle edges.

Hint: Blender will eventually support polygons of arbitrary edge count (b-meshes). The release of b-meshes is planned for end of 2011.

Now there are some ongoing discussions about when you should use Tris and when you should use Quads in your model.  The most important issues with this are related to texturing and animation. And during modelling you will face more problems with Triangles than with Quads especially when you plan to use the “Subdivision Modifier” for your work. Here are some issues with Triangles in your Model:

So whatever you create, it will be converted into a triangulated mesh upon import to the target system. Hence it makes a lot of sense to learn how you can use triangles for optimization purposes. I might later prepare a separate tutorial “The secrets of Tris & Quads” at some time in the future. 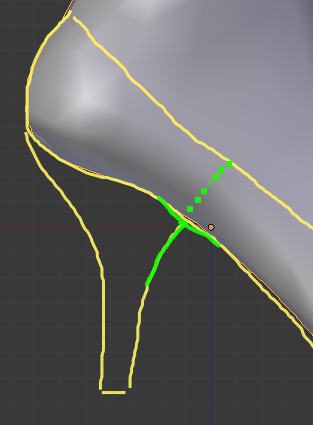 For now our guideline will be:

So keeping this in mind, we will take a first look at our shoe. And we will concentrate on the top of the heel, where it joins the sole. There you see 3 lines coming together and forming a “T” shape.

T-shapes are locations where you will be tempted to use Tris. But in many cases you can avoid that by just “completing the broken edge” as i have sketched in the image to the right (look at the green dotted line).

Now take your own pump (if you have one at hand) and check how the cobbler has solved this issue. You often will find that shoes do add a seam exactly where we added the extra edge. Though the edge may flow with slight variation, for example it may be bended more or less, it may go straight upwards, or even backwards…. 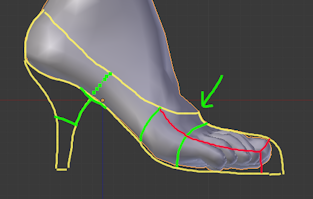 I will also add another edge right in the middle of the heel, because its backpart needs some bending.

Now let us check the front part. Here we see that our model needs some bending. But bending can only be done along edges. Hence we will have to add at least one edge here. But when looking at the place indicated by the arrow, we already can imagine that something will happen there.

It may be not obvious, but we will see later, that we will go along the way i sketched in red (i silently added another Grease pencil layer). Just take another look at your shoe. You might find a seam there too. Well, maybe not in your pump though…

The shoe tip is not a complicated part either. We can (for now) just neglect the smooth bending which we certainly desire for our model. That will be fixed later when we refine the model.

And now we are very well prepared to create our Box modell. We can reduce the opacity of the grease pencil layers. That helps us to actually see, what we are doing when we create the model.
And because our modelling method is named “Box Modelling”, all starts with a cube… That sounds familiar, doesn’t it ?
We only have to get over one additional quirk with Blender: As soon as we create our initial cube, our sketch disappears. This is because every object has got its own Grease layers. But fortunately we can borrow the layers from other objects, so we can get our sketch back easily. Here is how it goes: 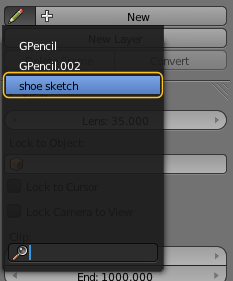 I will start at the tip of the heel. This is somewhat arbitrary. So i move the cube to its place, then enter edit mode and build up the model according to the sketch by extruding . The following sequence of images shows you, how i proceed: 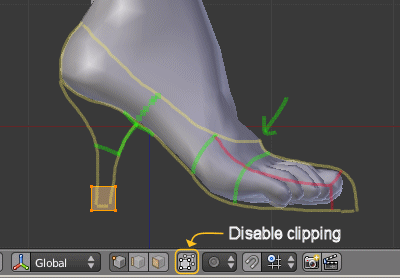 Hint: I always extrude complete planes. This ensures that i only create Quads. Therefore i have disabled clipping: 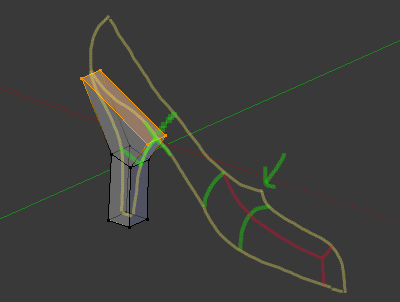 Here you see, that adding the vertical green edge makes a lot of sense: 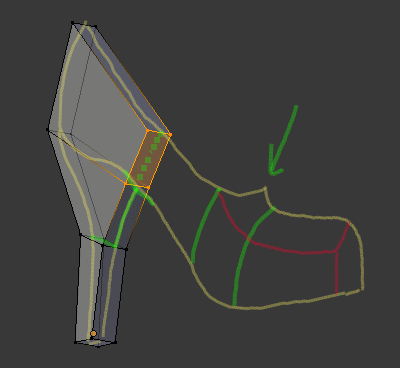 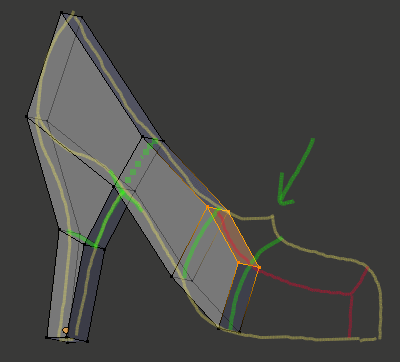 Here we are actually splitting up our flow. I first extrude upwards, and then (see next image) i extrude 2 faces 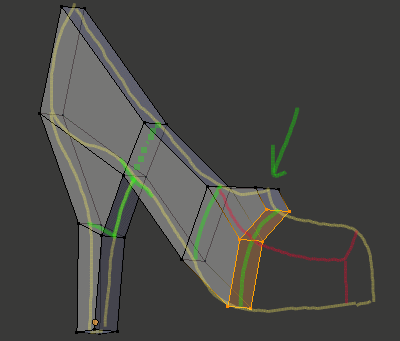 From here i extrude once more to reach the tip. 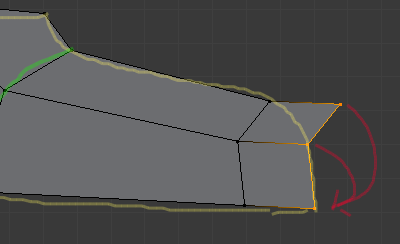 And a last extrude to close the tip. Note that i have collapsed the 2 upper vertices into the vertex at the bottom (see red arrows) So i end up with 2 (actuall 4, remind the other side of the shoe is currently not visible) triangles

But i can join the triangles into quads by pressing ALT+j
So after scaling the upper part of the shoe up by a factor of  about 5, we end up with a clean and very low poly shoe prototype: 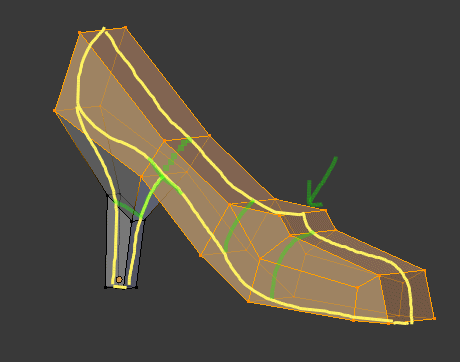 The art of 3D modelling is mostly the art of avoiding time consuming work. Our shoe is mostly symmetrical. And i now mean the shoe, not the pair of shoes. The symmetry is not perfect though. Anyways we can make a symmetric model and later add the asymmetric bending. Hence our next step will be to add a mirror modifier. And this will save us a lot of work in 2 ways:
However there will be a caveat as you will see in a minute. Let us go to side view and then add a mirror modifier. Here is a brief description of the configuration panel (for a detailed description on the mirror modifier page in the blender wiki): 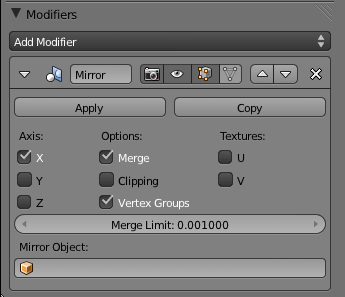 So let us see what the mirror modifier did to our object. The grey part is the mirrored part. We will see further down how we also can show the mirrored vertices. We first have to fix something. Mirroring along the X-axis  is not what we want. Our mirror axis is apparently Y. So lets change the mirror axis from X to Y  in the modifier.
So,  what happened here ? Why don’t we see 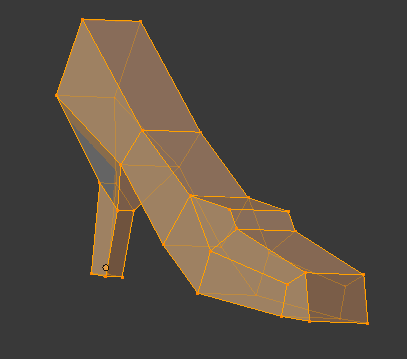 the mirrored part ? Lets go to side view and see where the object Origin is located.

Do you remember what i wrote about the mirror plane ? 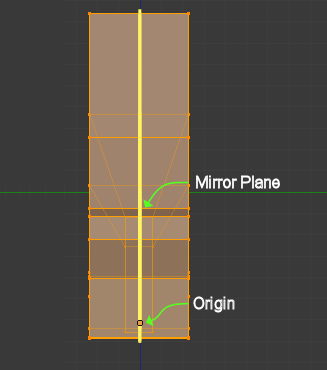 It is fixed to the object origin.  Hence right now the object is mirrored exactly into itself. So lets move all vertices along the Y-axis and see what happens… 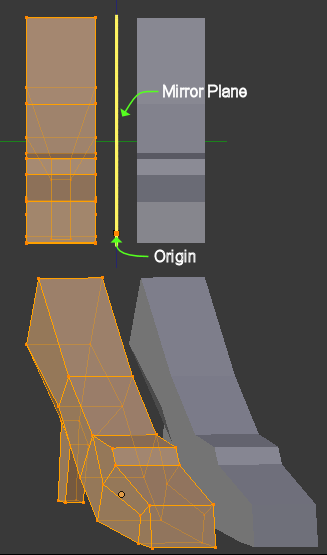 Now the mirrored object appears. again. But we do not want to half shoes, we want one object only!

And this is where clipping comes into play. When we enable clipping now, then move the selected vertices back towards the grey (mirrored part), then when both parts touch, you will see that the moved vertices do not move further than up to the mirror plane. Now continue the move until also the heel parts touch. 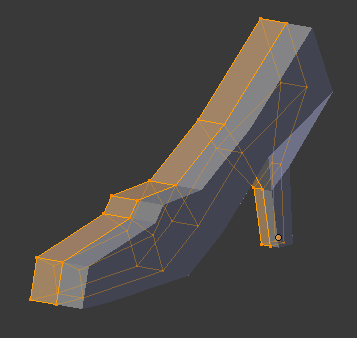 But hold on, there is still something wrong here. When you look closer then you see that some vertices and edges now are located inside the shoe. This is very bad and if we do not fix that immediately we will later get a ton of problems with our face normals and with crazy artefacts during texturing.

General Rule: Never accept vertices, edges or faces INSIDE a closed mesh. There may be exceptions though (as always) but you really should take care to avoid this situation at all.

Now how to fix that ?

First lets us hide the mirrored part, so that we can get better access to the bad vertices. We can do that in the Mirror modifier by disabling visibility in edit mode:

And go to edge select mode. Now we can immediately see which vertices and edges are the trouble makers: 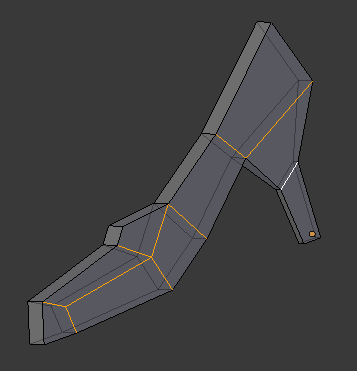 In the image to the right i have selected all unwanted edges. Just remove them and you end up with a half hollow shoe and that is exactly what we want. 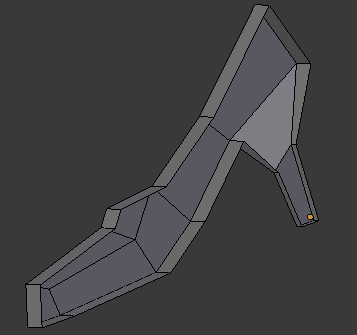 Now we only need to make the modifier visible again and we will end up with our first rough low polygon model of our new shoe. This model is as clean as possible (i hope i did not make any basic mistake) And it is well suitable for our ongoing activites.

When you enable visibility in the modifier, you will get another small triangle icon. When you also enable this one, then the mirrored vertices get displayed. And they even are selectable for edit. 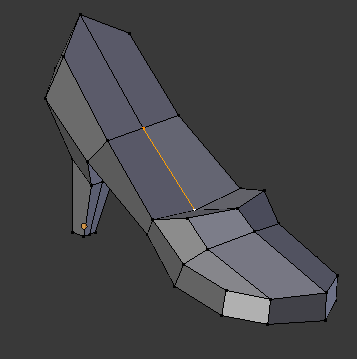 You can play and shift vertices around a bit. You will see that you can not break the mirror. I have spent a bit of fine adjusting the vertex locations and the end result of my basic model looks finally like in the image to the right.Our immediate next move will be to open the interior of the shoe to make it look more realistic. And we will want to make the shoe more smooth. We will do that in the next chapter.