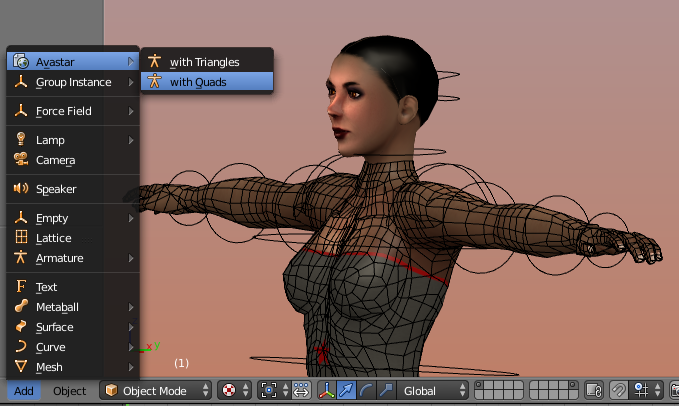 When working with animated characters then it is in general preferred to use quad based meshes over triangulated meshes. However the Second Life Standard Character specification is based on a triangulated mesh and that is what the Avastar Addon offers by default. This triangulated mesh can be used as animation template, but it does not serve well as mesh template for derived (cutting out)  work (think of t-shirts, pants, tight fitting clothes, …)

So we decided to provide a quaded SL character, the Quaded Avastar, mainly for usage as a mesh template for quick prototyping of derived mesh clothes.

Note: We have taken care that a triangulation of the quaded Avastar reproduces the original Avastar character so that it is fully compatible with Second Life. The Mesh topology of the quaded Avastar has been taken from a mesh template that was provided by Linden Lab ( avatar_mesh.zip ) We have carefully verified that the template is compatible to the character used in the SL Viewer.

When Sparkles Pro is installed, then the simple menu entry

gets replaced by a submenu (see image above) where you can select either the original triangulated version of the Avastar character or the new quaded counterpart. Both character versions work exactly in the same way in the Avastar environment (they precisely interact with the Shape sliders)

Avastar provides an Update tool that can be used to convert already existing Avastar rigs to the newest Rig Version. We have decided that the Avastar update tool automatically converts old Avastars to Quaded Avastars (of course only when Sparkles Pro is enabled).

If you want to cut out a pair of pants, or a tight shirt, then please first create a quadified Avastar. Then use the freeze tool to get an editable version of the Mesh. Then cut out to your likes.