A Rig is an animation control system for a Model. Rigs can use different methods for animating. For example it is possible to animate a mesh only by using empties and constraints, so no single bone is involved, yet it is an animation system.
The most common form of Rigs is based on Bones. This special form of a Rig is also named Armature.
Rigging is the process of creating the Rig.

Note: The Term “Rigging” is often also used as a synonym for Skinning (see below). We also find the term “Rigged Mesh” for example, which would actually be more accurately named “Skinned Mesh”.  It is also very common to talk about “Rigged Characters”. Depending on the context it is often clear what is meant.
However since in Blender we clearly have to distinguish the processes and workflows, we should also use precise terminology. Thus we distinguish between Rigging (make the rig) and Skinning (weight the mesh).

The rigging panel basically contains a collection of properties which also are available at other regions in Blender. But having them all in one place is a time saver. The panel is provided It has 4 major sections:

(1) Bone constraints are only visible in Edit Mode and Pose mode. 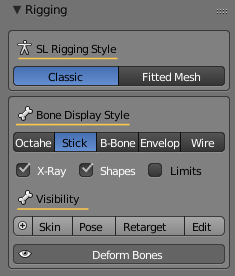 The Avastar Armature can be configured for Classic Rigging (using only the SL Base Bones) or for Fitted Mesh Rigging (additonally use of the Collision Volume Bones).

Attention: The Rigging Style selection only marks the corresponding bones as Deform Bones. The Weighting of the Bones is part of the Skinning Process.

The first row of buttons changes the bone shape. You probably will mostly select the Octahedron Style or the Stick Style.

In the Second Row of the section we find 3 properties:

The first row of the Bone Visibility section contains 4 Presets for different Workflows:

For details about Workflow Presets see below.

The presets actually do a bit more than just controlling the Bone visibilities. They also control to some extend what you can do with the Bones in the various Bone Workflow Presets:

The Bones are grouped into 12 subsets. You can enable/disable the visibility of each subset separately by enabling the corresponding view button (see yellow box in image).
Note: In the tool shelf the Bone Visibility Panel can be collapsed and expanded by clicking on the small (+)/(-) sign to the left of the Bone Presets.
Avastar Bone Sets are descriobed below in more detail. 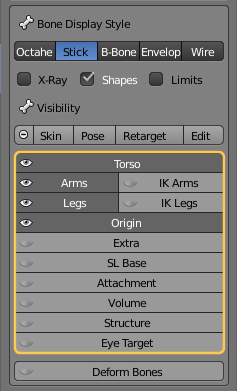 The (green) Control Bones and the (blue) SL Base Bones of the Avastar rig are closely related to each other. Actually the SL Base Bones by default inherit the control Bones Transformation matrices. Hence the control bone skeleton and the SL Base bone skeleton are like almost perfectly synchronized twins. You can see this best with Bone display mode set to Octahedral: 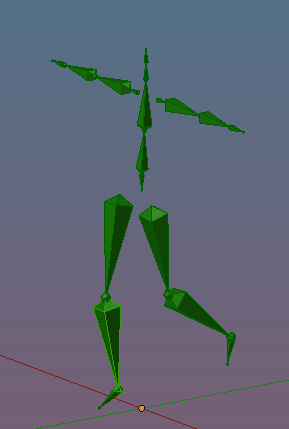 The Green Control Bones are the master bones used for Animation 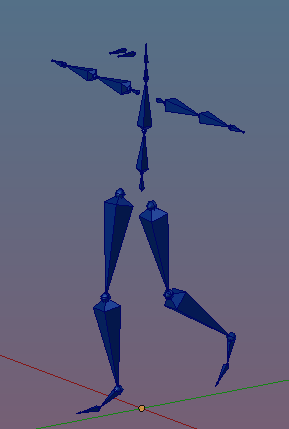 The SL Base Bones are used for Skinning (Weighting). They closely follow the green control bones

Since this behavior can be a bit tedious at times we have added the Bone Constraints panel to change the default behavior of the SL Base Bones on purpose (i.e. when you want or need it):

You can Unlock Rotations and Locations separately. For working on Human SL compatible Skeletons, you would almost always unlock the Rotation constraints and keep the Location Constraints to ensure your mesh can not be put into a wrong positioning. 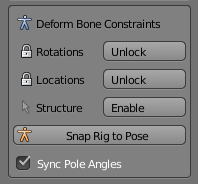 Note: The Bone Workflow Presets (see above) take this into account. So when you select the Skin preset, then the constraints are automatically set appropriate for the Weighting workflow.

The Avastar Rig also contains a set of Structure Bones, although there are no corresponding SL Base Bone available. The structure Bones are mostly beneficial for Animation when you create non Human characters like Quadrupeds for example (dogs, cats, lions, horses, …)
By default the Structure Bones are not selectable. But when you work on non human skeletons you often want to reposition the structure bones as well. 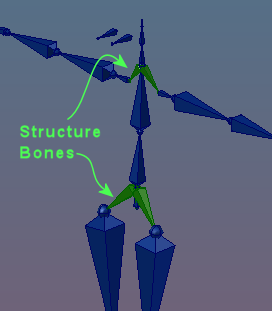 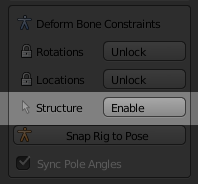 The Snap Rig to Pose button is a quick way to make the current Pose the new Rest Pose.

Snap Base to Rig (available in Armature Edit Mode)

The Snap Base to Rig button allows to snap the SL Base Bones to the Control bones. You need this function whenever you have modified your Rig in Edit mode.

Important: You should NEVER modify the SL Base bones in Edit mode. Please use always the Green Control Bones and then use this Snap function.
Right after you have clicked on the Button an operator panel will show up at the bottom of the Tool Shelf. You might need to scroll down the Tool shelf to spot that panel:

The Operator Panel gives you some control over which bones shall be snapped:

Pole Angle show up when you are working with IK Targets. It is important to have the Pole angle set correctly because otherwise you will see remarkable changes of your pose when you switch between FK and IK mode.

So what is the Pole Angle? In short the pole angle is the relative Bone roll of the constrained Bone (the Elbow here) between a plane that is defined by the Bone’s IK Target Bone (the IKWrist in the example), its Pole Target, and the Chain End point of the IK Chain (the Collar Bone here): 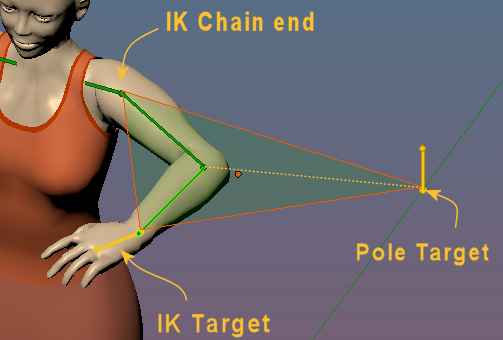 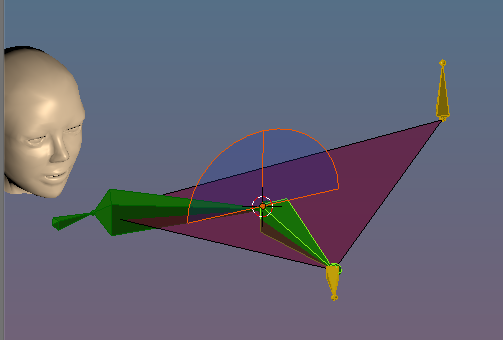 Note: The definition of the pole angle is done in Rest Pose. The bending of the Arm in the images above just makes it easier to spot how the pole plane is constructed.

For a simple Rig like the Avastar Rig the Pole angle is typically 0°,90°,180° or 270°  but it can have any angle actually. Blender allows to set the Pole angle manually. Avastar provides a function that calculates the optimal pole angle automatically whenever you switch from Edit mode to pose mode.

Our course Non Human character Creation tells more about this. You also find some information about the Pole Angle on the Web. You find some resources with Google, see blender pole target