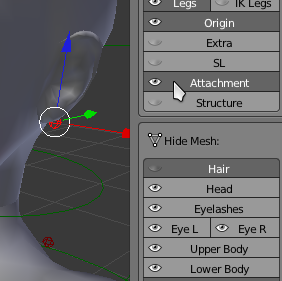 The attachment points on the avatar (that you would normally attach prims to in SL) are also animatable. In Avastar they are treated as an extra set of bones. By default they are not visible but can be shown easily by enabling the Attachment layer. With custom bone shapes on they appear as small red spheres. Note that quite a few of them will be within the body of the avatar. Either setting the armature to x-ray or the Control Style to Stick Shapes will make them much more visible. 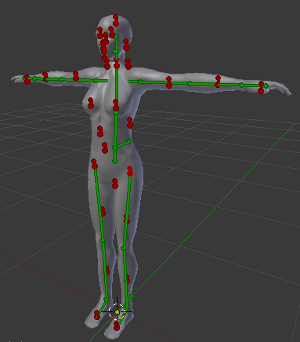 You will need to export the animation in the anim format and upload with a suitable viewer.

It’s possible to treat the animation points as extra bones and weight them to a custom mesh, but there is a problem. Collada 1.4 and the SL mesh importer doesn’t cope with bone names that have a space in them and unfortunately most of the attachment points are two word names.

Currently Avastar’s bone weighting mechanism doesn’t create weights for attachment points so this will have to be done by hand using the usual mesh weighting tools.