Attaching a model to the Shape Sliders is used to test how your model reacts to the SL Appearance Sliders.
Note: If your custom mesh shall be used only for a specific shape, or when you are confident that your mesh is properly weighted, then you can fully ignore this feature.
[PS-Youtube id=”Gs4uNJUaUQU” w=”320″ h=”206″]

In this workflow i use a dress as my working Custom mesh. It has been designed to match the default Avastar character. Its weights have been optimized for fitted mesh, hence it already contains weight groups for Collision Volume Bones.

Important: In this scenario we do not want to change or generate any weights for the dress. Weighting of a Custom Mesh will be discussed in other workflows (to be done) 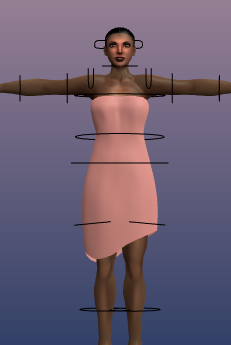 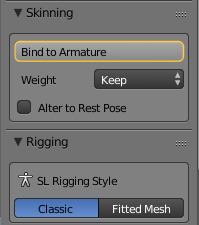 Now you are ready to press the Bind to Armature button. At this point both your mesh and rig are still selected and can stay selected for the next steps in the workflow.

Note: If you are doing Classic Rigging, the binding part is now finished.

This applies only if you want to prepare your Rig for Fitted Mesh Rigging: 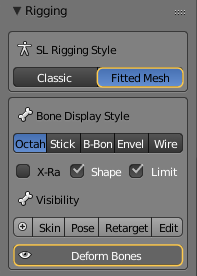 Hint: By now you have prepared the Armature for fitted mesh, while you have kept your Custom mesh and its weight maps unchanged. (Remind that this workflow explains how to attach an already weighted mesh to Avastar, hence the preservation of the weight maps is done on purpose.) 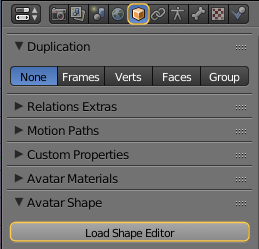 Note: Loading the Shape editor is only necessary when you open a blend file that contains an Avastar Rig right after you started Blender. In that case the Avastar Buttons are not yet initialized and the Load Shape Editor button shows up. 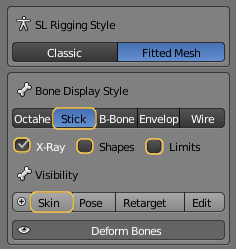 Note: The sliders do not directly change your mesh! We use Blender’s shape keys instead to store the influence of the sliders on your mesh. Hence however your Custom mesh changes while you modify slider values, these changes can later be fully reversed or applied (see below).

While the sliders are attached, the panel offers 3 new options:

Note: When you cancel the Sliders (press the “X”) then the Avastar shape will also be reverted to its values just before you attached the sliders!

Then we have one more button for Shape refresh. When you press this button, then your mesh shape will be recalculated based on the current weight values. This button comes into play when you are editing the Collision Volume weights. You will press this button whenever you want to see how your changes on the weight maps influence your Custom Mesh.

Note: The Refresh Button can also be activated via the keyboard shortcut ALT Q

Occasionally you will want to apply all your slider changes right into your mesh (provided you have attached the sliders to your mesh). Here we have loaded a gnome shape and slightly adjusted the resulting mesh. Now we want to keep this mesh as our new mesh base. We achieve this by clicking on the Apply button in the Sliders panel (see also further above)

Note: This feature is most welcome when you want to create multiple variants of a mesh for different base shapes (e.g. to support the Standard size shapes published from several creators of SL Garments). 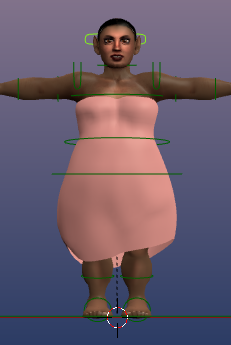 When it comes to attaching shape sliders, then we have to take care of 3 things:

So we can always tell that we get the currentMesh by applying the sliderSettings to the baseMesh:

But in general when we attach sliders we only know the currentMesh and the sliderSettings. So attaching sliders to a mesh always needs to calculate the baseMesh:

When an Avastar armature is in the Default shape (standard female) when we attempt to attach the sliders, then the baseMesh and the currentMesh are almost(*) identical. Hence we know the baseMesh in this case by definition.

But when the armature is initially in any other shape (like the gnome shape for example), then the baseMesh (default shape) and the currentMesh (the gnome) differ significantly. Now the problem is: the calculation of the baseMesh is not as straight forward as it may look.

But we found a way to recalculate the exact baseMesh from the currentMesh and the current Slider values. And once we have the baseMesh, we can again precisely calculate all meshes for any slider setting.

(*) SL would not be SL if it had not added yet another easter egg here. Actually the Default shape of Avastar differs slightly from the BaseMesh. And this is the reason why all calculations become so complicated and why we had so many troubles for months. But we finally have solved this puzzle. So no worries, we got it to do what we want.

Looking at the BaseMesh

Once the sliders have been attached, we will find 3 shape keys in the Object’s shape key list:
You can inspect the BaseMesh by disabling the visibility of the bone_morph. Then you might see something like this: 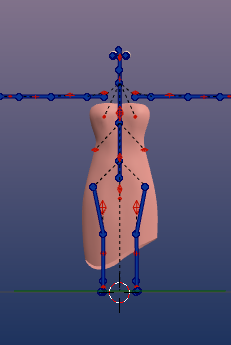 As expected the neutral_shape looks almost identical to the dress as it looked in the Avastar default pose (see above).

So, after we have found the exact baseMesh we now can take the “Gnome Dress”, attach it to the Gnome Shape, then reset the shape to the default Avastar shape, and since the dress is attached to the sliders, we end at the default Avastar Dress again. Thus we can now do a full round trip between 2 arbitrary slider settings. And here is how it goes when we continue with the gnome shape.

Please be aware that attaching the Sliders may take a few seconds However this slowdown happens only once for the initial slider attachment!

Hint: The calculator uses 2 presets which can be set in the Avastar Addon Panel (See User Preferences, Addon Tab):

In the final sequence we will revert the Avastar shape back to the default shape to check how the dress shape changes:

You see the resulting mesh is not distinguishable from the initial mesh that we used to start this workflow (see far above). 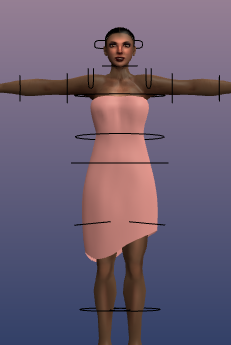