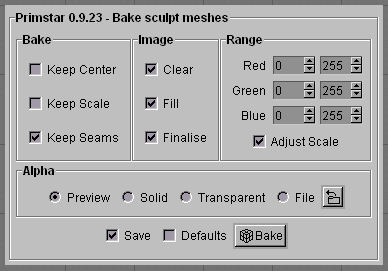 The default settings of the baker are chosen in a meaningfull way, so you could in most cases end up with just hitting the “bake” button and keep the default settings. But sometimes life is a bit more complicated. In the remainder of this document you will find more in-depth descriptions about what the baker “also” can do for you. I believe it is a good idea to at least know about the options although you may not use them frequently at the end.

Improvements to the baker have made this option almost useless. When this was added, all vertices falling on a single pixel were averaged to give the final 3D position that was baked to the sculpt map. By selecting “Keep Seams”, any edges that were only part of one face or that were marked as seams disabled this averaging and just the position from the seam is used.

Since then, the baker was improved and now gives preference to the vertices closest to the bottom left of the pixel rather than taking an average. This means that “Keep Seams” only has an effect when the UV layout has multiple edges aligned together.

This situation doesn’t occur with normal sculpties, but the feature was left for cases where manual unwrapping has given problems due to multiple edges clashing. In those cases, you can mark the edge you really want as a seam and enable “Keep Seams” so it’s given priority over the others.

This option prepares the sculptmap in such a way that the mirror option in world will create an exact mirror of the sculpty. As a side effect the resulting sculptmap is more compressible.

Sculptmaps contain a set of vertex coordinates encoded as RGB-values. Each 3D axis corresponds to one axis in 3D space (x -> red,y -> green, z -> blue) The color range of each axis is [0,255] The default settings will force the usage of the best possible resolution on each axis. that is the reason why sculpties always render with perfect cubic Bounding boxes (all axes of the BBox have length 1m in world). As one matter of fact sculpties normaly can not be made smaller than 1 cm on each axis. And this is where the color range comes into play:

If you reduce the color range, the resulting sculptie will become visibly smaller because only a fraction of the available space is used. You can reduce the color space from 256 values (0,…255) down to a minimum of 4 (e.g. 0,1,2,3) on each axis. Thus the smallest possible cube you can create with this technique would be: 4/256 cm = 15.5 Microns

Note: The bounding box of the sculpty still remains the same as with full color range.
The sculptie only “appears to be smaller”.

Adjust scale is only used in the context of the LSL exporter which also creates a script for scaling adjustments. Adjust scale also only applies when you have modified the color range (see above).